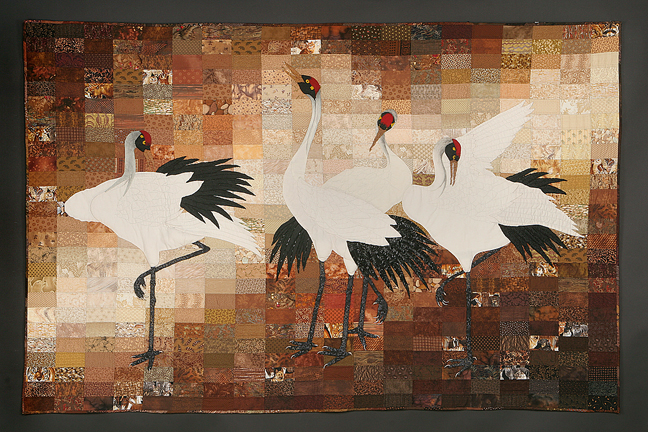 It all started years ago when I designed four white cranes on a brown background with a lighter tone that moves from the left to the right, enhancing the movement and energy that comes from these beautiful birds.  I was pleased with the design but frustrated when I realized that collecting the small brown fabric pieces was going to take years.  I was also intrigued about why this image had suddenly taken form in my imagination.

During a visit in Italy my brother expressed his appreciation for my new interest in quilting, something very new to my former country, and in that moment I decided, without telling him, that the crane quilt that I had designed was going to be his.  When I returned to America I started piecing the brown swatches together and included a few images of animals to capture the essence of his personality: vibrant, energetic, playful, with an element of surprise.

After that visit we talked more regularly on the phone, with a depth that had never been there before. Due to my mother’s advancing age I thought our closeness was natural as we anticipated her death.  With time a feeling of disquiet emerged that I didn’t understand.

Then one night I woke up abruptly with a strong pain in the right side of my abdomen, which disappeared after few minutes.  At the same time my husband awakened from a nightmare of falling.   I was left with the clear knowledge that something awful had happened.  I thought of thieves coming to our house, but we checked all the windows, the front porch  and the back porch: all was very quiet, and our  home was enveloped in darkness.

Early the next morning I received the phone call from my sister that my brother, while supervising the renovations on his condo, had been accidentally hit by a construction crane and had fallen head first into the room below and was now in a deep coma.  He had fallen at the same time I woke up with that strong pain (with six hours difference).  He died two days later, after donating his organs.

My heart was broken and my pain was devastating, but I knew that my unconscious was now more than ever supporting me.

Completing this quilt became my way of processing my pain, it was both a lament and a celebration of life, with all that it encompasses, from high to low, dark and light.  It also portrays his family: him in the center, his wife in the center but below him, and his two sons at each side.  To my surprise I discovered that if I follow this configuration with my hand I make  the sign of the cross.

I am thankful to my Unconscious for helping me bring all  of this together in a meaningful way.